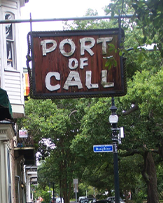 If you want the best burger in the city, you need to find your way to the edge of the French Quarter. On Esplanade Avenue at Dauphine you will find the Tiki inspired decor of Port of Call. They don't serve french fries with the burgers, so don't ask. You get a baked potato that you can load up with all sorts of goodies and a burger cooked to your specification. I usually get the cheeseburger that comes with a huge pile of cheddar cheese. Dripping with meaty goodness (as I order mine medium rare), you quickly taste why Zagats and Gambit agree that it the best burger.

Be sure you walk to the end of the bar to get seated or you can eat fast at the bar. The wait staff are very friendly and quick with service, refills and extra napkins.
Posted by Mary Griggs at 2:53 PM 2 comments:

Located just steps from City Park on Carrolton is Fellini's Cafe. Billed as offering Mediterranean inspired dishes, the place is usually pretty full at lunch time. I went there to eat with four other people and I've never been around wait staff better able to avoid eye contact than the group working on Friday. It took them more than 10 minutes to get an emptied tabled cleaned and wiped down so we could sit in a place that was only 2/3 full.

Once that little incident was behind us the afternoon improved. My Bloody Mary was small but potent and the plate of hummus was generous enough for all five of us to enjoy. I had the portabella mushroom sandwich on foccacia and was a little disappointed by the small slices of mushroom. The feta cheese and sun dried tomato mayo quite overpowered the tiny amount of mushroom. The fries were great though--plank style with Cajun seasoning. I also tried the crab and corn soup and it was richly flavored with large pieces of crab. The woman who got the roasted eggplant sandwich said it was delicious.

All in all, it certainly wasn't a terrible meal so much as a bit disappointing for the price. I will probably return when it warms up to sit outside and watch the streetcars go by but I won't necessarily go back for the food.
Posted by Mary Griggs at 5:41 AM 1 comment:

The Southern Food and Beverage Museum is a nonprofit living history organization dedicated to the discovery, understanding and celebration of the food, drink and the related culture of the South.

Here at SoFAB, we have a special project that has been a part of our mission since before we even had a museum: we collect menus. We have menus from Galatoire's back when they had a men's cigar room, menus from the first Tex-Mex restaurant in Houston, menus from the Chinese restaurants in South Carolina, and menus chronicling the suffering of restaurants right after the oil spill this summer. We believe that menus help paint a picture of the culinary landscape of a place, indicating what food people ate, how they describe it, and who eats it.

We need your help to keep our collection growing, so we're asking for menus from restaurants in the South, Southern restaurants outside the American South, from the past and from the present. We'll reward the person that sends in the most menus from now until January 28 with a wonderful and informative cookbook from Anne Butler. Join us on Facebook to qualify!

Whoever sends us the most menus by the end of the month will receive a free cookbook. The contest rules are:

- You must be a fan of the Southern Food and Beverage Museum on Facebook.

- You must send menus to us postmarked no later than January 28th.

Along with your name and mailing address, please send any submissions to:

The winner will be announced on Wednesday, February 2nd, 2011.
Posted by Mary Griggs at 6:44 AM No comments:

I had a morning conference meeting and we decided to head over to Lil' Dizzy's Cafe on Poydras. The cafe is located in the old Whitney bank building and we had enough people to use their vault room for our meeting. The glass table rests on two old safes and the walls are thick enough for your group to occasionally get raucous. I always worry when I take a table out of the way that the server will forget about me but the staff was quick to check back in and offer topping up of the coffee and water and getting the food to us very quickly.

The breakfast portions are good sizes with lots of extra bread and jelly to go with the delicious omelette's. I had heard the biscuits weren't too good, so I skipped them but the bacon was thick, the home style potatoes had a Cajun flavor and the eggs were light and fluffy. One of the diners was moaning over how good the grits were but wouldn't share so I can't report personal experience with them.

Everyone was friendly and the decor is amazing--imagine a diner dropped into an ornate bank lobby. I'm definitely going to have to head back there for lunch and see if their down home good cookin' is as good at that meal as it was for breakfast.
Posted by Mary Griggs at 7:35 AM No comments:

Mona's Cafe is a great corporate citizen and I have called on them several times for food donations for local events for my nonprofit clients. It is also a place I take vegetarians to change up their palate after they've been enduring what passes as meat free meals at some of our better known local restaurants.

Yesterday, I stopped by for a late lunch. Starting with the lentil soup that was peppery and smooth, followed by a snack of pita and hummus and ended with a Chicken Shawarma wrap. The flavor combinations were just what I craved on a cold afternoon.

A bonus to going to them on Frenchman street is the attached grocery store. The perfect place to grab rose water, red lentils or if you want to get charcoal for your samovar or stuff for your hookah.
Posted by Mary Griggs at 5:00 PM No comments: