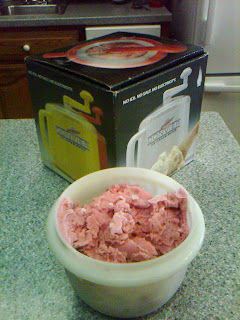 It is strawberry season and one of the best tastes of summer is using fresh strawberries in home made ice cream. I use this recipe for all types of fruit based ice creams--peach, blueberry, blackberry. Depending on your aversion to seeds, feel free to sift the puree. Adultify your ice cream with liqueur or use 2 T of vanilla. Finally, I dehydrated some strawberries and then chopped them up so there were pieces of intense strawberry flavor in among the deliciousness.

Hull and wash strawberries. Place all ingredients in the blender, and puree until smooth. Refrigerate until cold, and then process in ice cream maker according to manufacturer's instructions. I use a Donvier and it takes about 20 minutes. Transfer to plastic container and freeze until firm.
Posted by Mary Griggs at 4:57 PM No comments:

My parents and I had brunch today. The plan was to use escargot but the two cans we had in the pantry did not smell right, so we used shrimp instead. The result was very flavorful but I would recommend to have something more than a side salad if you intend to serve it for dinner.

Caramelize the onion in 2 tablespoons butter in a cast iron skillet over low heat. Once the onion has begun to turn brown, add the mushrooms. Saute over medium heat until the mushrooms have released their liquid. Add the garlic and slowly whisk in the Sherry. Add the glace or stock and bring to a boil. Add in the shrimp and cook until pink. Whisk in the final tablespoon of butter and then simmer until the oven has preheated to 500 degrees.

Divide the mixtures into four ramekins. Wet the top edge of the ramekin with water and press down the edges of the puff pastry to seal. Cut two vents into the pastry before brushing the top with melted butter and sprinkling with cheese.

Set the ramekins on a cookie sheet to catch drips. Cook the ramekins in the oven for approximately 12 to 15 minutes or until puff pastry is golden brown and crisp. Let stand 5 minutes to cool slightly. Serve with a salad and French bread to sop up any remaining liquid.
Posted by Mary Griggs at 2:23 PM No comments:

This time I was out with my feminist peeps on the final day of the NOW MidSouth Regional Conference. We headed to Mid-City for brunch at Santa Fe Restaurant. Chosen primarily for the $1 mimosas, the $3 Bloody Mary was a pretty good sell, too.

They were a little stingy with the jalapeno muffins--we had 12 people there and they only brought three small bowls! Other than that, the wait staff was pretty quick with refills of drinks, coffee and water and to check in with us.

I had the Breakfast Burrito with scrambled eggs, mushroom, corn, black beans, potatoes and poblano pepper sauce. With a layer of cheese melted over the top, it was a little unwieldy for eating it by hand, so I had to be proper and use a knife and fork. The burrito was very good and not being bogged down with rice was a treat.

I ate samples off of a couple people's plates. The shrimp and grits was very good--creamy with just a hint of heat. The Huevos Rancheros were very tasty and the layers of flavors melded together perfectly.

We arrived early so we had the place to ourselves for a while and could kick back with wide ranging dialogue on all sorts of issues. They do have an outdoor area and, on a day as beautiful as today, I can definitely see spending a long afternoon there, with a brunch that goes to dinner time!
Posted by Mary Griggs at 11:37 AM No comments:

It's been a long build up to the start of the Louisiana Legislative session and I went out with a political cohort for drinks tonight. We ended up at Felipe's for cheap food and strong margaritas. Located at 301 North Peters, it is close enough to the edge of the French Quarter to avoid the crowds and expense of the more touristy areas.

The chips were piping hot and the salsa tasted fresh made. I also ordered nachos and, while there were a lot of jalapenos that I had to pick off, the layers of beans, cheese, sour cream, salsa and guacamole were quite substantial. I ordered a regular lime margarita on the rocks and my dining companion had the frozen strawberry (with sugared not salted rim). They very much tasted like more so we did.

I would definitely recommend them for their bar and bar food. Maybe next time we'll actually order from the rest of their menu. Er, probably not! lol
Posted by Mary Griggs at 6:44 PM No comments: