I'm a big fan of Tom Fitzmorris' Root Beer Glazed Baked Ham. The glaze is fantastic and the cooking method makes the perfect crust on the outside.

However, I was in Rouse's grocery store the other day and saw they now have an Abita Root Beer Glaze in a bottle. So, I bought it, a New Orleans Chisesi ham and invited a couple of guinea pigs...I mean friends over to see if the glaze was a decent alternative to the two day process of glaze making and baking.

I scored the meat and squirted on the glaze and then patted on a mix of brown sugar and dry mustard. I cooked the ham at 350 degrees F for 15 minutes a pound until it registered 160 on a meat thermometer.

What came out was tender and delicious with a lovely crust and beautiful color. 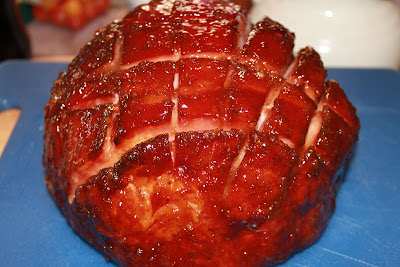 Dinner was great but I'm now really looking forward to the ham sandwiches!
Posted by Mary Griggs at 7:57 PM